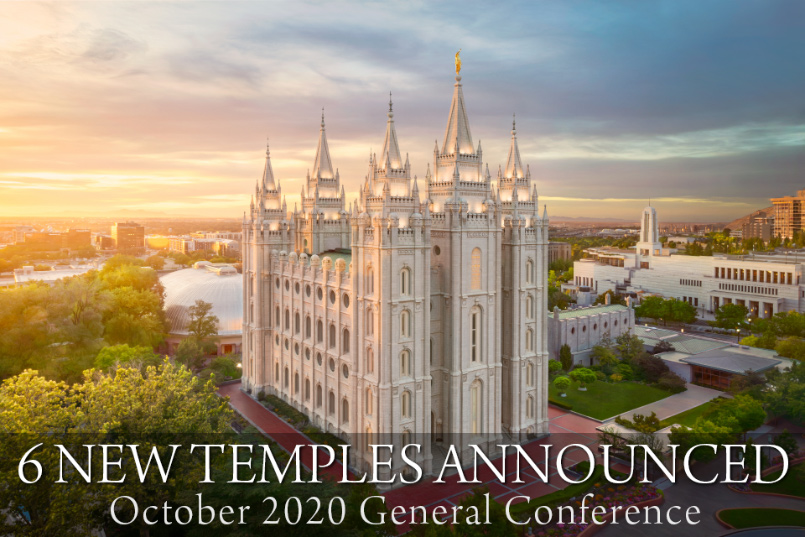 (Feature photo of the Salt Lake Temple by Rory Wallwork.)

This weekend’s General Conference was another unique experience due to Covid-19, but that doesn’t mean it was any less inspirational and wonderful. As the final session of the Church’s 190th semi-annual general conference came to a close, President Nelson announced plans to build 6 new temples! They will be located in Tarawa, Kiribati; Port Vila, Vanuatu; Lindon, Utah; Greater Guatemala City, Guatemala; São Paulo East, Brazil; Santa Cruz, Bolivia.

These twelve new temples will bring the total number of temples that are operating, under construction, or announced to 230 temples worldwide. As for temples that were dedicated, there were none this year. The COVID-19 pandemic delayed dedications for the Rio de Janerio Brazil, Washington D.C., and Winnipeg Manitoba temples. There are also eight temples that are currently closed and receiving major or minor renovations. These temples will be re-dedicated when the work is finished.

By the end of the year, there will also be 21 temples for which ground will have been broken. In the April 2020 General Conference, Elder David A. Bednar said, “This year we will break ground and start construction on 18 temples. In contrast, it took 150 years to build the first 18 temples, from the organization of the Church in 1830 to the dedication of the Tokyo Japan Temple by President Spencer W. Kimball in 1980.” And it turned out that even more than 18 temples will have started construction in 2020. Here in the United States, the temples that will break ground and begin construction in 2020 are the Moses Lake Washington Temple, Taylorsville Utah Temple, Bentonville Arkansas Temple, McAllen Texas Temple, and the Red Cliffs Utah Temple.

What a wonderful world we live in, when we can build temples so quickly around the world! By the end of this year, 35 temples will be under construction in total.

You can read more about each specific location below:

This will be the first temple in Kiribati, an island nation in the Pacific Ocean near the international dateline. There are nearly 21,000 Latter-day Saints spread throughout some 40 congregations — approximately one-sixth of the population. The Church of Jesus Christ operates Moroni High School in Kiribati.

This will be the first temple in Vanuatu, which is home to more than 10,000 Latter-day Saints in nearly 40 congregations. Port Vila sits on the south coast of the island of Efate. In the early 1970s, several Latter-day Saint families moved from Tonga to Vanuatu. Missionary work began in 1975.

The Lindon Utah Temple will be the seventh temple in Utah County. As the Church’s world headquarters, Utah has 2.1 million Church members, which is approximately two-thirds of the state’s population of 3.2 million residents.

This will be the fourth announced temple in Guatemala. The country is home to nearly 300,000 Latter-day Saints in approximately 440 congregations. The first missionaries began preaching the Gospel of Jesus Christ in 1947. A year later, the first official church meeting occurred in a rented building with 66 individuals in attendance.

The São Paulo East temple is the 12th temple announced in Brazil, which is home to approximately 1.5 million Latter-day Saints spread throughout some 2,100 congregations. There are 35 missions of the Church in Brazil, second most to the United States. The first known member of the Church to live in Brazil immigrated from Germany in 1913. In 1986, Brazil became the third country outside the United States to have 50 organized stakes (similar in size to a diocese). The temple in São Paulo will be the second in the city.

This will be the second temple in Bolivia, a country home to more than 200,000 Latter-day Saints spread throughout 270 congregations. With a population of more than 3 million people, Santa Cruz is one of the largest cities in the country and is located on the Pirai River in the eastern Tropical Lowlands. The Cochabamba Bolivia Temple was the first to be built in the country.