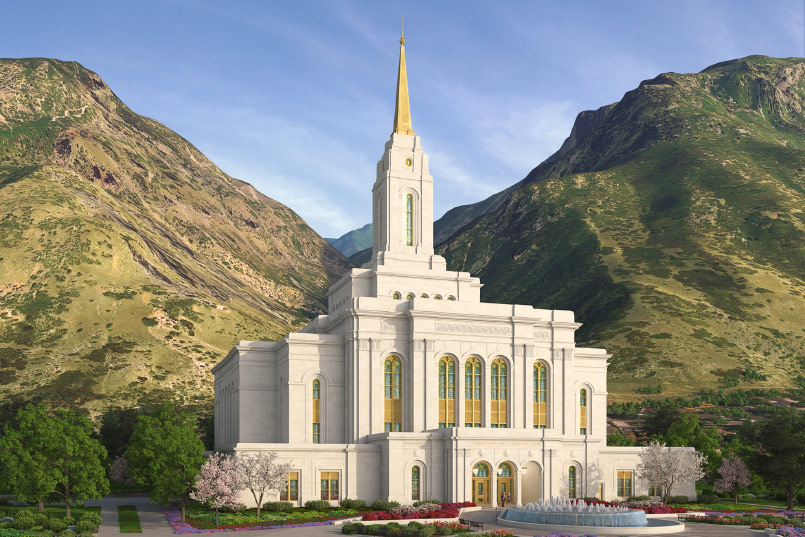 Stunning artist renderings of the redesigned Provo Utah Temple (above) and the Smithfield Utah Temple (below) were officially released today. We’re so excited about the new Provo Temple, and it’s going to be beautiful! It will be sad when the time comes to essentially tear down the current temple, as it surely holds a significant place in many people’s hearts. But it’s a necessary change, in order to accommodate the ever-growing number of Latter-day Saints in the area who seek to attend the temple, especially with the next-door Missionary Training Center and nearby Brigham Young University.

President Nelson announced at the October 2021 general conference that the Provo Temple will begin reconstruction as soon as the Orem Utah Temple is complete. The major redesign and exterior overhaul to the temple will be just shy of its 50-year mark. The temple’s changes are similar to those several years ago of its sister temple, the Ogden Temple, which underwent a major renovation and architectural change unlike any other temple. The Provo Temple will go through a similar redesign and reconstruction process, resulting in a very different appearance (as you can see above) from its present exterior.

In addition to the extensive overall exterior redesign, the renovated Provo Temple will be built without an angel Moroni statue. The Church of Jesus Christ of Latter-day Saints has reaffirmed the primary purpose of its temples is to draw people closer to God and His Son Jesus Christ through worship, instruction and unifying sacred ordinances, with the temples’ exterior and interior designs and elements secondary to that purpose.

This major change to the Provo Temple is what we assumed would happen eventually, and it makes sense – the members in the area will be able to attend the Orem Temple while work is being done on the new Provo Temple. No official closure dates have been announced yet.

The new Smithfield Utah Temple (directly above) is also going to be beautiful! The Smithfield Temple was one of 20 new temples announced by President Nelson during the April 2021 general conference. The new temple’s location was announced back in June – the intersection of 800 West and 100 North. The temple will be a three-story structure of approximately 81,000 square feet – a large temple, considering the area it’s being built in!

As is always the case with these early announcements, the detailed design plans for the Smithfield Temple are still being developed. Interior renderings, as well as more information, will be made public at a later time.