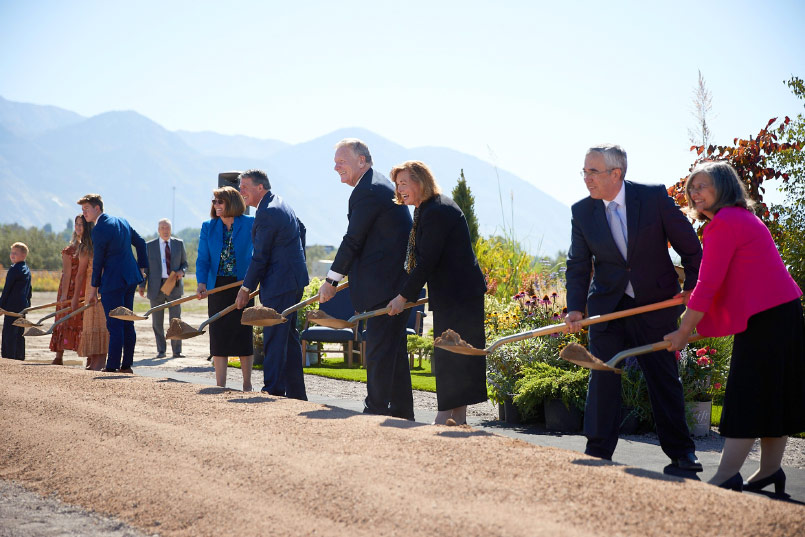 A small groundbreaking ceremony for the Orem Utah Temple was held on Saturday, September 5, 2020. Elder Craig C. Christensen, Utah Area President, presided at the ceremony and offered the dedicatory prayer. Because of local government Covid-19 restrictions, it was a small gathering. But it’s a huge step forward in the process of building the new Orem Temple!

“The Orem Utah Temple will become an added refuge of strength in an increasingly uncertain world — a holy place where we learn and live more fully the great plan of happiness made possible by our Savior, Jesus Christ,” said Elder Christensen.

Currently there are 24 temples in Utah that are in operation, are being built, or have been announced. The Orem Temple is one of two Utah temples that were announced during the October 2019 General Conference. But the need is there, and it doesn’t mean temples are any less important because there are more of them in any given area.

“Having other temples in close proximity does not diminish the eternal importance and significance of this sacred building,” said Elder William K. Jackson, a General Authority Seventy.

“Human nature has taught us that proximity and ease can lead to complacency,” Elder Jackson added. “That is something to be challenged. Schedule time to attend the temple. … For many of our brothers and sisters around the world, the temple is a once-in-a-lifetime experience due to distance and expense, but I testify to you that their reverence and commitment to the temple is amazing.”

He continued, “This temple will be a place of personal revelation and learning. It will be a refuge, a sanctuary of peace in an often cluttered and noisy world. It will serve to mend, help, strengthen and encourage all who come here to worship and be edified.”

The Orem Temple will stand strong on a 16-acre site at approximately 1471 South Geneva Road, west of Interstate 15 and south of University Parkway. It will likely be visible for miles around.

“In the coming months, the Orem Utah Temple will rise toward the heavens from this beautiful spot of ground overlooking one of the most heavily traveled areas in Utah,” said Elder Evan A. Schmutz of the Utah Area Presidency, who grew up in Orem.

“[The temple] will act as a beacon, drawing the gaze of millions as they pass by this hallowed ground, and inviting the devoted service of hundreds of thousands of faithful Latter-day Saints, as the ordinances of salvation are offered to the living and the dead,” said Elder Schmutz.

A video of the entire groundbreaking ceremony is available to watch, which you can view below.

We’re so happy about this addition to the many temples in the Northern Utah area. Now we’ll finally start seeing huge strides forward being made on the construction of the beautiful temple. Of course we’ll continue posting updates as the work progresses, so be sure to check back later as the months and years move along.

Below is the video and a few pictures of the event, plus the artist rendering of the future temple. 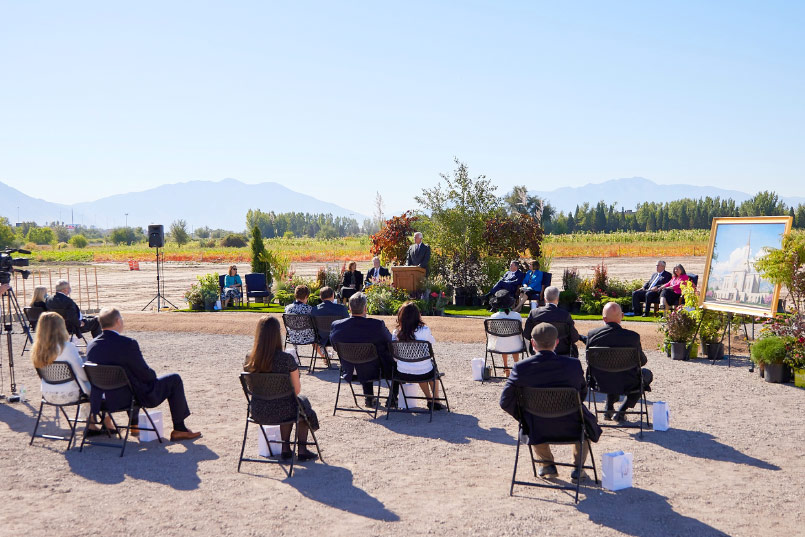