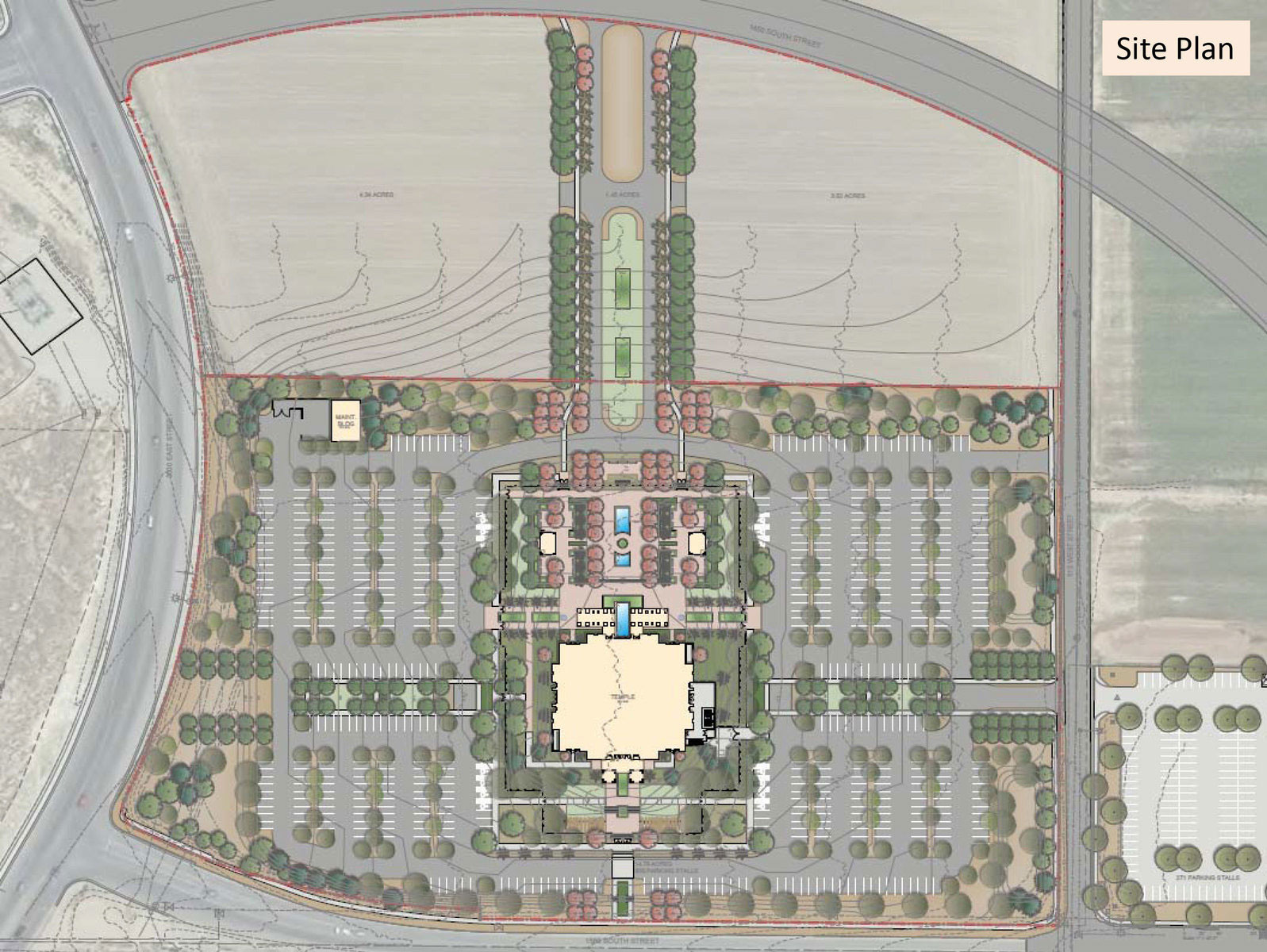 We’ve had a few recent developments with a few temples around the state of Utah that we wanted to share with you! These news stories are always great to hear because it means that the construction of the temples is getting very close! Today we’ve got some new news about the Washington County Utah Temple, the Orem Utah Temple, and the Layton Utah Temple, as well as a bit of information about why some of the most recent artist renderings haven’t included a statue of the Angel Moroni.

On April 14, a conditional use permit was approved for the Washington County Temple St. George Planning Commission meeting. The plans that were submitted include a 3-story temple at approximately 70 feet tall and a steeple section rising no higher than 230 feet. The plans also show the temple being surrounded by 600 parking spaces, as well as large grounds right around the 96,000-square-foot temple. The beautiful landscaping looks like it will include hundreds of trees, prominent water features, ornamental fencing, and a boulevard-style driveway leading into the grounds. As photographers we love seeing incredible grounds like these, because it makes the temple an absolute joy to photograph! Even more so than usual. 🙂

Also on the 14th, the Orem City Council approve a zone change for the 15.39 acres at 1465 S. Geneva Road where the temple will be built, along with a meetinghouse. Currently the land there is zoned as OS5 zone. It will now be rezoned to a PD-50 zone that has been designed specifically for the temple. This may not mean much to most people, but we do know that it means the plans are moving forward! Artist renderings of the temple will most likely be made available within the next few months.

There are only six week before the scheduled groundbreaking of the Layton Temple on May 30, 2020. And in preparation for that great day, activity is starting to increase at the temple site. There was a fence around the property which has now been removed. And heavy equipment is starting to arrive at the location, including a loader and an excavator. Plenty of large pipes that will carry utilities to the temple (seen in the picture above) have also been delivered. As with the above news items, every little bit of progress means we’re getting closer to having a new temple!

No Angel Moroni Statue On Some New Temples?

You may or may not have noticed that on some of the most recent artist renderings of new temples there is no Angel Moroni statue depicted on the top of the spires of the temples. Most recently, this has been the case for the Tooele Valley Temple (seen directly above) and the Moses Lake Temple. And as you might notice in the site plan above, it appears that the Orem Temple also doesn’t have a statue on top. You’re not alone if you’re wondering why some of the newest temples won’t have the Angel Moroni atop the temples’ central spires. And to be honest – we’re not sure why either!

In a recent article by the Daily Herald, Tom Heath, project manager for the Orem Temple construction, said, “Right now that’s in discussion with the First Presidency and the Presiding Bishopric. Not all temples are having Moroni installed.”

One theory is that it may be due to city codes or ordinances. But that may very well not be the case. It may just come down to inspiration and the direction the Church of Jesus Christ is heading.

Brent Roberts, managing director of special projects for the church, said, “The way we approach design (of temples) is not traditionally how individuals approach construction. We pray and attend the temple. We feel it is a mandate from the prophet before we take it to the First Presidency. It’s more of a spiritual opportunity.”

So until there is an official statement about why the Angel Moroni doesn’t stand atop some of the newest temples, we’ll just have to speculate. But either way, the temples will be magnificent!